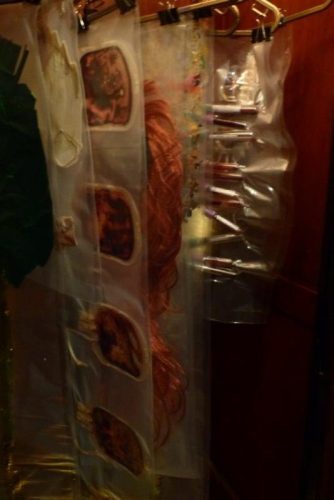 The lifespan of an image in performance is fleeting and too quickly a performance and its designs are dismantled, packed away in sealed boxes and stored in unseen spaces. A process was embarked on where all of the visual detritus pertaining to my body of work as a performer-scenographer-theatre-maker was unpacked and displayed as something reminiscent of a haphazard curiosity cabinet. The chief aim of a curiosity cabinet, apart from the collecting and storing of items, was for comparative analysis and the extrapolation of differences and similarities. It was through the juxtapositioning of disparate objects that comparisons, parallels and common themes were encouraged. Presented here in this curiosity closet is a curated selection of items where interconnections were most evident: What emerged when surveying the items were visual statements that approached and presented the human body as a sexual, violent and abject animal that both consumes and is consumable.

In keeping with the role of the curiosity cabinet, which is regarded as a microcosm of the world or a theatre of memories, small worlds and recalled spaces of sexual, violent, abject and consumerist cultures have been created from past performances. Real properties, costumes, archival information and data pertaining to past performances are displayed as well as hybridities and collisions between works and in some cases aspects of conventional performance archive materials have been deconstructed and reformed into new artworks and visual statements in and of themselves. In this curiosity closet the lines are blurred as to what is historically accurate archive and what is imagined and projected – this is in keeping with the tradition of the curiosity cabinet, which, at its best, housed fact and fiction and generated anthologies of myths. 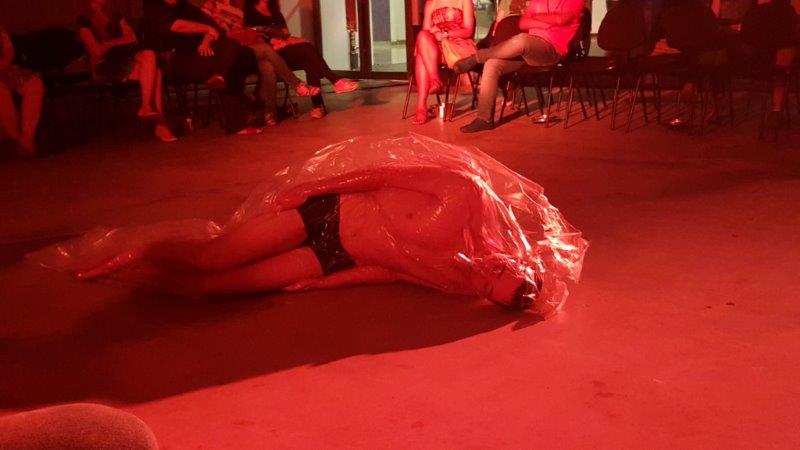 Inspired by early English public shaming and torture practices (sometimes referred to as ‘rough music’), artist Gavin Krastin creates a contemporary re-engagement with these barbaric rituals. In Rough Musick a visual and visceral experience unfolds through the brazen clashing of images and activities sourced from Gaelic folklore, pre-Christian English ‘sin eating’ ceremonies, ‘bogey man’ mythologies and psycho-sexual fetish role-playing games. Through Krastin’s striking theatricality and characteristic heightening of the visual image and physicality, the pre-Empire white culture of the United Kingdom is rendered exotic and strange, positioning the artist of British descent as the ‘primitive’ and other.

Gavin Krastin is an award winning South African performance artist, theatre-maker and designer-scenographer with an interest in the body’s representation, limitation and operation in dialogue with alternative, layered spaces. His work is inspired by his immediate South African environment and the colonial histories embedded in its shifting socio-political climate. Apart from operating within the conventional theatre context, Krastin advocates the migration towards unconventional spaces where unknown risk factors are imminent. The social underpinnings and philosophies of space intrigue him and inspire a questioning of operational systems, thresholds, proximities and the politics of boundary-crossings and transgressions in his work.